Hello
Thanks for your new Software. I’m suing my IC-9700 for the SAT QO-100. Do you will support soon the SAT Mode, where I can see the 70cm (UP-Link) and 2m (Down-Link) at the same time in two waterfalls?
Best 73 de HB9RYZ
Wolfgang

That feature is in the works. It’s a bit complicated as we have to re-work how we do a lot of things. 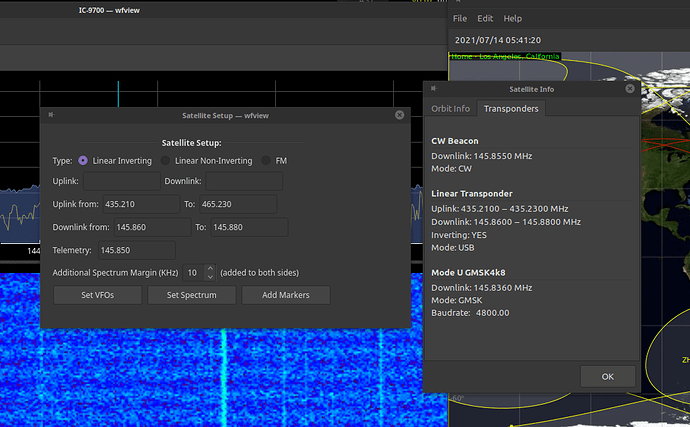 two waterfalls is not supported I think in the current f/w of the rig, right, Elliot?

I haven’t tried it honestly, on the 9700. But yeah if the rig doesn’t do it then we won’t either.

I think for satellite mode, it’s really only the downlink where you’d want to see a waterfall anyway.

What I want to do is get the waterfall into “fixed” mode so that it isn’t shifting around as you tune. I want the boundaries of the WF fixed at the satellite’s passband, plus the telemetry signal, plus a little margin. The idea is to fill out that little dialog box, which is arranged pretty similar to the Gpredict box, and have wfview get your radio all set for that satellite. It’s not going to handle doppler or predictions or whatever – those are yours to deal with, either via software or manually – but it will get your spectrum display zoomed in just right and set the uplink band accordingly.

One thing that isn’t clear to me… with an FM sat, such as the ISS, my instinct is to put the radio into Inverting mode, so that tuning the downlink causes an appropriate shift on the uplink. I think on FM that would make sense. I know, FM circuits will lock and capture a few kc to either side, but just the same I’d rather folks be as tuned in as possible. So I think the “FM” button will activate the radio’s inverting tuning mode and put it into FM mode. If I’ve got it backwards, let me know, satellite users!

Hello Elliott
Thanks for your answer.

But I know, it was not easy to creat a INI file for the Omnirig for the IC-9700. The behavior is really strange.

Interesting to find out

I think part of the complexity is a result of older radios, which had more complicated commands for satellite mode(s), which created more complicated code. You can clearly see the loops of checks and A/B mode flipping in Hamlib, for example. It was necessary at one time. Now though, radios have evolved, and software backends need to take that step too and make it easier to use the radio’s built-in utilities for split and sat modes.

For satellite mode, we will definitely focus on the IC-9700’s commands and build around that. It’s clearly a radio that appeals to satellite users, probably more so than any other radio on the market right now. It’ll be interesting to see if we can add in support for satellite on other radios once we get it going on the 9700.

Hi Ellioot
I agree on your approach.
The IC-9700 is the state of the art transceiver for SAT operatios in these days.

I happened to see your homepage. What a station!

Have you any advice on IC-9700 satellite operation? I was using it the other night and I actually find the OEM controls at the radio somewhat cumbersome to configure. I’m admittedly new at working satellites, but it seems like the radio keeps fighting the user. At least that was my impression.

Any advice on how you would like satellite mode to appear to the user in wfview?

Hi Elliot!
I`m also qrv with the 9700 via QO-100 satellite. It works very nice with this trx.
I transmitting on 70cm into a up-transverter for 13 cm, receiving on 2m via down-converter. So the waterfall on 2m would be great to see in xfview. by clicking on a signal in 2m wf the 70cm band in sat-mode should follow in NOR not REV. This would be great to work remotely via the bird.
73 Guntram oe9dgv

I found that one can basically select which VFO is generating the waterfall by toggling between main and sub on the 9700. What’s annoying, is adjusting something on the transmit VFO (such as PL for the FM birds) causes the waterfall to toggle over to the transmit side! I wish Icom would let us just stick the waterfall on only one VFO and have it stay that way in SAT mode. For now, while I am kind of learning about sats in general and also how the 9700 does things, you pretty much have to use wfview with the rig within reach. Again, largely just due to my inexperience with sat operation.

I’d really be happy if wfview could do this:

And I want to make the sat setup dialog box just like the telemetry dialog box in gpredict, so that information can be easily entered without a lot of thought process.

I could definitely use some mentoring here, so please folks, chime in with ideas!