I have been using wfview for a year and it works great. But after trying a linux mint client i am not able to get audio on the air. The rig transmitt but no sound. Have tried both from a win10 pc and a Linux.
Not sure that the linux created the problem. I have tried to reset the station and new config of the program.
I can see on the server that audio connects.
server: win10
station ic-7300
client win10
version wfview: 12d

Check under Settings to see what the radio’s modulation audio source is set to. It should be set to “USB” so that audio comes in over the USB port.

If you are running a nightly build, I think you can use Phil’s addition of a modulation meter, found under “Radio Status” (new button at the bottom of wfview near About). This meter shows transmit and receive audio separately and has been really helpful when I am troubleshooting headsets and stuff like that.

Thanks for answ. It is set to USB both on client and server. Is there any setting in the radio ( SET…) that can cause trouble?
And what about the local pc?

The Mod source actually operates the SET menu on the radio to change the radio’s modulation setting.

On the server, make sure that the radio’s USB “sound card” is selected as the audio device. If you may have changed it recently or disconnected/reconnected other USB audio devices, you might want to exit the wfview server, open it back up, and see if the setting still looks correct.

On the client, the audio device needs to be the sound card for the headset or other microphone attached. I usually will close wfview and make a recording of the audio and verify that I’m reaching about half-scale and play it back for a quality check. I recommend making your headset your “default” device at first, because it is more likely to “just work”.

Do you have a recent beta version with the audio meters?

Thanks. I have not started to update from Patreon. I tried the last one now 22020327… it worked but i was not able to se the changes you mention. I found it in the description, but is not able to find a way to install that. Do i have to install all off the files? (one by one)?

Do you see this button at the bottom-left?

We only just recently merged the branch that contains this feature. 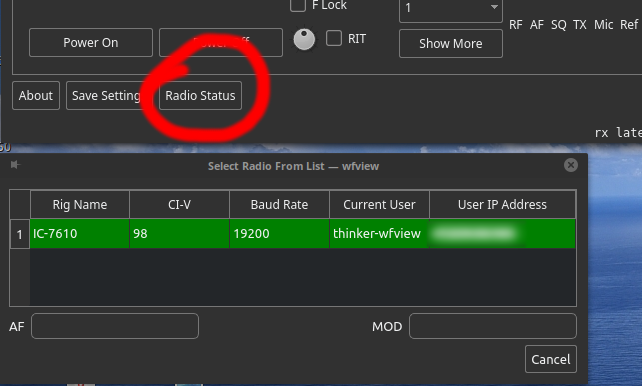 No after installing the last file - dated 2703 - i saa that the setup page was changed alot.But i do not se Radio Status.

Will you only see this “at the remote side”?

I checked around a bit here for you. The “Radio Status” button is only in the “wfserve” branch, which is unstable at the moment. I had thought it was merged into the master branch, which would generally be stable, but it isn’t merged in yet.

But with that said, I am running a build from commit 468cfa1 without any issues (that I know of). This contains the Radio Status button with the AF metering function. If you are building yourself, the way to download this exact code is:

Followed by the usual steps to build (see the Developer’s Corner part of our website for that info).

Now, I want to be clear, this is a very beta feature and from an experimental/unstable branch of ideas and features that Phil is working on. When it’s stable, it’ll get merged into the master branch and then you’ll see the automatic build machine cranking out windows and linux binaries for download.

Sorry I jumped the gun on this feature, I should have checked the merge status!

Let’s keep working on the headset audio issue though, with or without the metering.

I believe you would see the Radio Status button at either side, but I am not certain as to what it would do on the server side since I have not tried that yet.